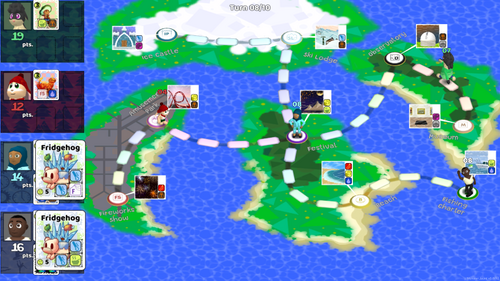 Hello! Things are coming along well with Monster Jaunt, although a lot of the work for the past few months has been things like marketing assets, sound effects, and other sundries that don't really look like a lot of progress is being made but that are important to get done. One other new development is the addition of a new board (one of several I'll be adding before launch), so now seems like a nice time to detail how the boards actually work and how I'm designing them.

On the Monster Jaunt boards, your goal is to bring monsters to vacation destinations that they will like based on their type preferences. Using the screenshot above as an example, Nubia has stopped at the Festival in the center of the board, which will satisfy Social and Food; her Fridgehog likes Cold and Food, so their Food is satisfied by the Festival. (Joel, meanwhile, is stopping at the Fishing Charter instead to satisfy Food.) After each turn, all monsters who are fully satisfied score points, but all other monsters lose happiness and will end up scoring fewer points.

As indicated in my previous post, I went through several other board mechanics and iterations to get here, so what's good about this system?

As for this particular island board, you'll notice that certain types are only present in one quadrant of the board, so certain monsters will only be worth taking if you can get to a specific quadrant easily. This makes some monsters more valuable than others depending on your board position, so you'll need to win minigames or else be careful about going too far down one path.