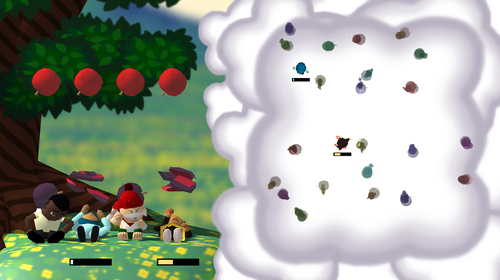 Hello! Today, I want to reflect on the original concept for Monster Jaunt, since I still like the idea and it doesn't really exist in the final product, except for one minigame.

When looking for a concept for my first commercial game, I naturally wanted to choose something that would play to my (limited) strengths at the time, so I investigated options for a minigame party game; I was fresh off a software engineering job and wanted a game that would require breadth instead of depth -- an abstracted, modular codebase for many different mechanics instead of a specialized framework requiring lots of refinement. I also had done a lot of game jams, so a genre with many small minigames seemed perfect.

I had also started streaming more often, and at some point in 2015 I tried playing three games of Mario Party at once, with one controller sending the same input to all three. (That's something lots of people stream, right?)

It actually worked pretty well! I've tried this out with a few other games, and it works well for Mario Party since it has a lot of waiting for other players to take their board turns.

What was the most interesting was when multiple minigames came up at the same time but with different inputs. Think of something like Toad in the Box, which requires just the A button to time jumps, and Bumper Balls, which only uses the Control Stick to move. Neither quite requires full attention to play, so it's fun to try playing both at once since they don't necessarily interfere with each other.

Now, add in a third minigame that is much freer with its input like Roll Call, in which A and B are used to count characters on-screen but the count is only locked in at the end. The A button presses for Toad in the Box now need to be managed so that Roll Call has the correct count when the timer runs out; alternatively, Roll Call can be ignored while focusing on the other games, but then it needs to be played extra quickly afterward. This sort of synergy didn't come up very often when choosing minigames at random, but when it did the outcome was very appealing. 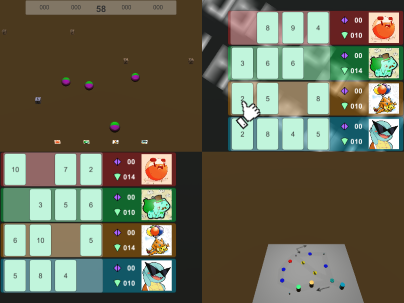 So, I prototyped a simple Mario Party-style board and a few minigames with inputs that wouldn't overlap too heavily. However, after some rounds of playtesting, it seemed that doubling the board and all minigames was much too overwhelming for most players.

I still really like the concept, though, so I at least made sure that one minigame preserved the feel of the "Double Party" prototype. You can try out this minigame, Snoozy Smoothies, in the demo right now!